Often, family caregivers have similar questions for which they need honest and informative answers, something we fully understand. We’ve assembled a group of frequently asked questions along with some helpful responses.

If you’d like more information, don’t hesitate to contact us. We’re here to help.  Contact Dementia Help Center
Call us for a FREE Consultation 760-636-6355
email: info@DementiaHelpCenter.com

I have read there are three stages of Alzheimer's. What are they?
​
As Alzheimer’s advances, it rarely fits neatly into categories or stages. Each person’s experience with the disease is somewhat different. Yet, certain behaviors and problems occur often enough that it is possible to describe the disease in three major stages: Early, Middle and Late. All three stages involve changes in the person’s ability to think and do things for themselves. Here’s an abbreviated picture of the symptoms and behaviors associated with the three stages of Alzheimer’s.

1. Early Stage (two to four years leading up to and including diagnosis) Symptoms (one or more present):

3. Last Stage (one to three years)
Symptoms (one or more present):

My father has had several Transient Ischemic Attacks (TIA) and a more serious stroke. He is now very confused and forgetful, and acts erratically. Is it possible that he has Alzheimer’s?
​

One possibility is that your father has developed Vascular Dementia, an umbrella term that describes impairments in cognitive function caused when arteries that feed the brain become narrow or blocked. Vascular Dementia is the second most common cause of dementia, after Alzheimer’s, accounting for up to 20 percent of all dementias. It is caused by brain damage from cerebrovascular or cardiovascular problems – usually strokes. In many cases, it may coexist with Alzheimer’s disease. The incidence of Vascular Dementia increases with advancing age and is similar in men and women.

Symptoms often begin suddenly, frequently after a stroke, though not all stroke victims get dementia. Patients may have a history of high blood pressure, vascular disease, previous strokes or heart attacks. Vascular Dementia can worsen with time, depending on the occurrence of additional strokes. In some cases, symptoms may improve. When the disease gets worse, it often progresses rapidly, with sudden changes in ability. When the mid-brain regions have brain damage, Vascular Dementia can cause a gradual, progressive cognitive impairment that resembles Alzheimer’s. Unlike people with Alzheimer’s, those with Vascular Dementia often maintain their personality and normal emotional responsiveness until the later stages.

What’s the difference between Alzheimer’s and dementia?

Dementia is not a specific disease. Rather, it is a descriptive term for a collection of symptoms that can be caused by various disorders affecting the brain. People with dementia have significantly impaired intellectual functioning that interferes with normal activities and relationships. They lose their ability to solve problems and maintain emotional control, and may experience personality changes and behavioral issues such as agitation, delusions and hallucinations. Memory loss is a common symptom of dementia, yet memory loss alone doesn’t indicate dementia.

Alzheimer’s progresses gradually, initially involving short-term memory. It first affects the parts of the brain that control thought, memory and language. Over time, symptoms worsen, creating a significant source of stress for the family caregiver. Once diagnosed, the lifespan of someone with Alzheimer’s falls between three and 20 years, typically progressing through three stages (see above).

Doctors diagnose dementia only if two or more brain functions such as memory, language skills, perception or cognitive skills including reasoning and judgment are significantly impaired. A person can say something and contradict it a moment later with no realization, making the sheer lack of predictability daunting. Many diseases can cause dementia; among them heart attack and stroke.

Currently, there are 19 identified forms of dementia. Some 60 to 70% of dementia cases are Alzheimer’s related; another 20% are Vascular Dementia, as described above, the result of oxygen or blood deprivation occurring, from a heart attack, stroke or Transient Ischemic Attack (TIA), referred to as a mini stroke.

Drugs or naturopathic medicines can treat some of these diseases and, while not a cure, can improve symptoms or slow progression of the disease. Some causes of dementia may be stopped or reversed if they are discovered soon enough.

For more complete and in-depth information on dementias, go to www.ninds.nih.gov/disorders.

Are there medications that can help with Alzheimer’s or dementia?

Several prescription drugs are currently approved by the U.S. Food and Drug Administration (FDA) to treat people who have been diagnosed with Alzheimer’s disease. Treating the symptoms of Alzheimer’s and Dementia-Related Diseases (ADRD) can provide patients with comfort, dignity and independence for a longer period of time and can also encourage and assist their caregivers. None of these medications can stop the disease itself.

Medications called cholinesterase inhibitors are prescribed for mild to moderate Alzheimer’s. These drugs can help delay or prevent symptoms from becoming worse for a limited time and possibly help control some behavioral symptoms. The medications include: Razadyne® (galantamine, formerly known as Reminyl®), Exelon® (rivastigmine), and Aricept® (donepezil). Another drug, Cognex® (tacrine), was the first approved cholinesterase inhibitor but is rarely prescribed today due to safety concerns.

Namenda® (memantine), an N-methyl D-aspartate (NMDA) antagonist, is prescribed to treat moderate to severe Alzheimer’s. This drug’s main effect is to delay progression of some of the symptoms. It can allow patients to maintain certain daily functions a little longer than they otherwise would. No published study directly compares these drugs. Because they work in a similar way, switching from one to another does not necessarily produce significantly different results. Still, an Alzheimer’s patient may respond better to one drug than another.

A friend said my husband and I should get a Power of Attorney. What exactly is that and why would I want it?

There are several types of Powers of Attorney; the General, Durable and Health Care Powers of Attorney are the most common. Whether for you or for a loved one, each is very important to have in place to guarantee the individual’s wishes and desires are honored accordingly. Here, then, is an overview.

General Power of Attorney Authorizes your Agent to act on your behalf in a variety of different situations.

Health Care Power of Attorney Enables you to appoint someone to make health care decisions for you if you’re incapacitated. This is also known as an Advanced Health Care Directive (AHCD).

“Durable” Power of Attorney The General, Special and Health Care Powers of Attorney can all be made “durable” by adding certain text to the document. This means the document will remain in effect or take effect if you become mentally incompetent.

A General Power of Attorney is very broad and provides extensive powers to the person or organization you appoint as your agent. You don’t have to appoint an attorney; however, you’ll want to appoint someone you absolutely trust. Powers usually include the following:

You also have the option to grant the following additional powers to your Agent:

A General Power of Attorney is typically used to allow your agent to handle your affairs while you are unable to do so. For example, when you are traveling out of the state or country or when you are physically or mentally unable to handle your affairs; a General Power of Attorney is frequently included as part of an estate plan.

There are many cases of abuse, the result of leaving yourself unprotected. A case I know firsthand involved a husband with early Alzheimer’s and his second wife who was his caregiver. While his wife was visiting her daughter out-of-state for several weeks, the husband’s son and daughter had their father assign them Power of Attorney, removed his wife’s name from the joint bank accounts, relocated their father to an assisted living facility in another county, removed all the furnishings from their father and stepmother’s home and rented it, all in three weeks. The wife had no legal course of action because they had never thought of having Powers of Attorney documents drawn; neither had any idea that as a married couple their assets were unprotected. Take the advice: Put your house in order.

When our father was in ICU for the final time, having an AHCD for him allowed us to insure actually, demand — he receive no life sustaining treatments in accordance with his wishes. Without those documents, our father would have been subjected to painful and fruitless procedures; with the right documents and determined voices, our father was able to transfer to a hospice house and pass in peace within 48 hours.

The health-related information contained on the Dementia Help Center website is meant for basic informational purposes only. It is not intended to serve as medical advice, substitute for a visit with a healthcare professional, or be used for diagnosing or treating a disease. Your healthcare provider should be consulted regarding matters concerning the medical condition, treatment and needs of you and your family.

We’ve been where you are. We can help.
Contact Dementia Help Center
Call us for a FREE Consultation 760-636-6355 email: info@DementiaHelpCenter.com

The mission of the Dementia Action Alliance is to collectively improve dementia care in this country.

The Alzheimer's Association is the world's leading voluntary health organization in Alzheimer's care, support and research.

Kae Hammond is a certified Consultant in the Positive Approach™ to Care philosophy and skills presented by dementia care expert Teepa Snow. 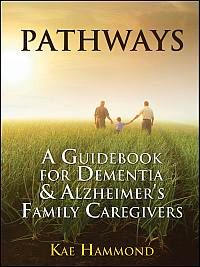 If you are caring for someone with Alzheimer’s Disease or Related Dementias, Pathways: A Guidebook for Dementia & Alzheimer’s Family Caregivers, will be your lifeline.